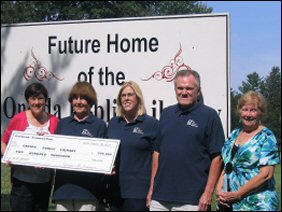 Standing on the lot for the passing of the ceremonial check (l. to r. in photo) were Eileen Kinsella, OPL board president; Joanne Larson, chair and treasurer of the Gorman Foundation’s board of trustees; Amanda Larson, the foundation’s president; Dr. Jim Sullivan, Sr., the foundation’s vice president; and OPL director Carolyn Gerakopoulos. 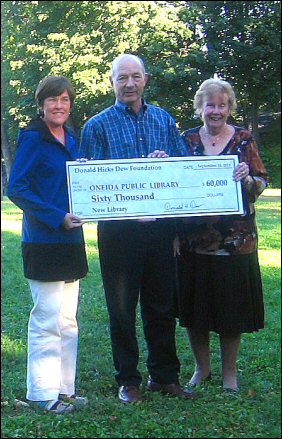 On behalf of the Donald Hicks Dew Foundation, Donald H. Dew recently pledged $60,000 to the Oneida Public Library Capital Campaign for the construction of a new 18,000 square foot library facility at 456 Elizabeth St. and Main St.

In the photo, Dew (center) passed on a ceremonial check to Eileen Kinsella (.), OPL board president, and OPL director Carolyn Gerakopoulos (l.) on the new library site just off Main St.

Dew, former chairman and chief executive officer of Diemolding Corp., is the principal officer of the Dew Foundation, a private family trust that contributes funding to local educational, social and health organizations. 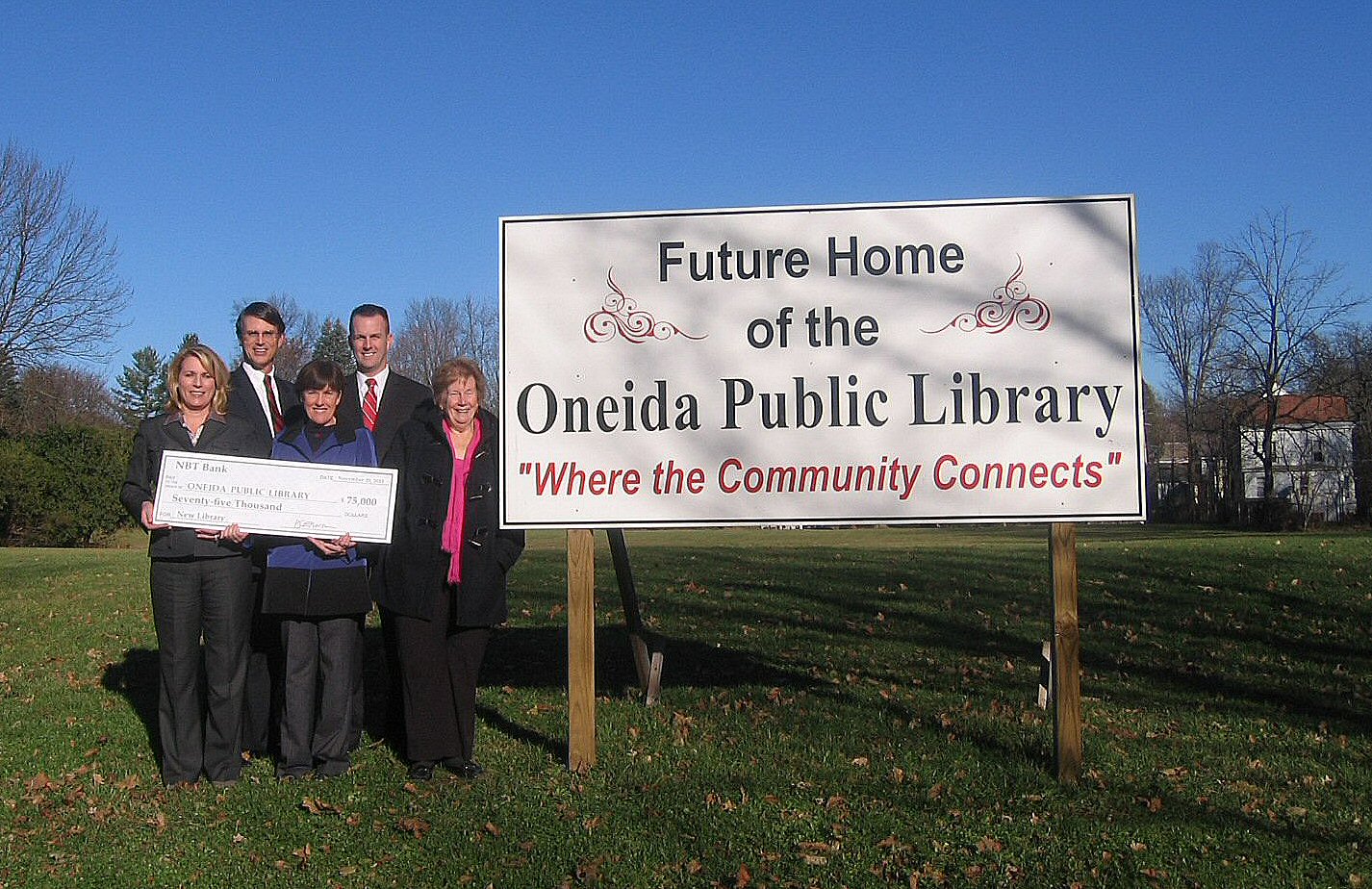 NBT Bank recently pledged a $75,000 donation to the Oneida Public Library Capital Campaign, which is raising funds for the building of a new library facility at 456 Elizabeth St. and Main St.

On behalf of NBT, Brad Adams (back row, left) and John Elberson (back row, right), both NBT vice-presidents, presented a ceremonial check on the grounds of the new library to (front row, left to right) capital campaign coordinator Carol Butler, OPL Board President Eileen Kinsella and OPL Director Carolyn Gerakopoulos. 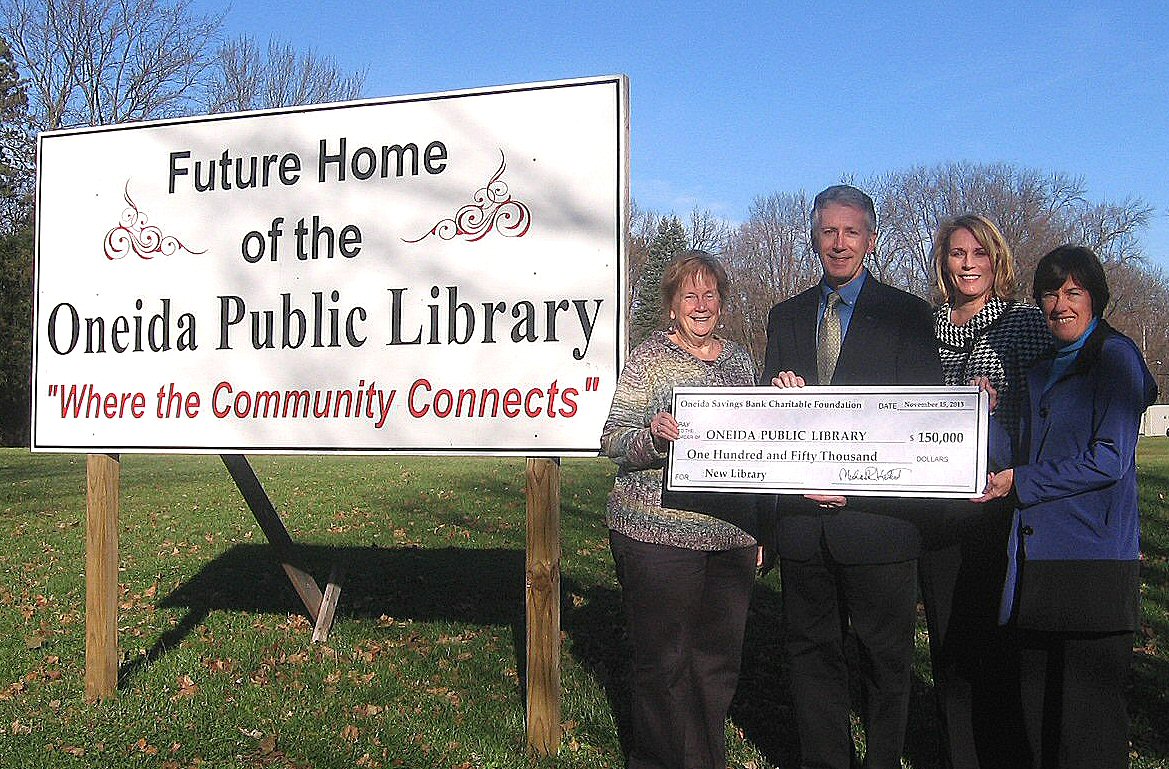 Late last year, the Oneida Savings Bank Charitable Foundation pledged $150,000 to the Oneida Public Library Capital Campaign, which is raising funds for the building of a new library facility at 456 Elizabeth St. and Main St.

In the photo, Michael R. Kallet (second from left), chairman of the board and CEO of Oneida Savings, handed a ceremonial check for $150,000 at the new library site to (left to right) OPL Director Carolyn Gerakopoulos, Capital Campaign Coordinator Carol Butler and then OPL Board President Eileen Kinsella. 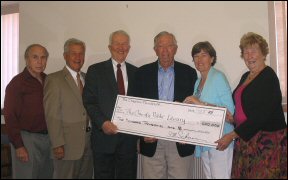 In a formal award ceremony August 5, the Howard and Bess Chapman Charitable Corporation pledged to the Oneida Public Library Capital Campaign $200,000 for the construction of a new library facility on the site of the old Oneida High School between Main and Elizabeth streets

The charitable foundation will be giving its name to the new OPL facility’s Activities Room, which will include space for pre-school story telling, crafts and a Maker Station for all ages.

The foundation, incorporated about 1991, was created by Oneida businessman Howard Chapman and his wife Bess to benefit the community. The City Municipal Pool and a wing of the Oneida Health Care facility are named in honor of the Chapmans.

Robert and Ada May Fearon 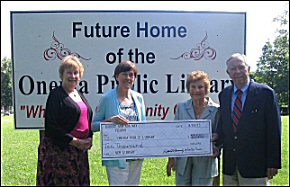 On August 4, Mr. and Mrs. Robert H. Fearon, Jr., topped their earlier donation to the Oneida Public Library Capital Campaign with a second $10,000 check delivered August 4 on the site of the new OPL facility, Main and Elizabeth streets. The Fearons’ total donation of $20,000 will go to the Capital Campaign.

“We were extremely excited when Bob and Ada May Fearon started off our capital campaign last year with a donation of $10,000,” said Eileen Kinsella, OPL board president. “With this additional donation to the campaign, I can’t express how much we appreciate the Fearons’ faith in our new library project. The Fearon family for three generations has been a loyal friend and advocate of the Oneida Library, and today Bob and Ada May Fearon have shown how devoted they are to the future enrichment of everyone in our community.”

Back in the early 1950s, Robert H. Fearon, Sr., president of Oneida Valley National Bank, was president of the Oneida Library Board of Trustees and spearheaded the drive to build a new library facility at 220 Broad St. to serve the City of Oneida.

On hand to receive the check were OLP Board President Eileen Kinsella and OPL Director Carolyn Gerakopoulos.

Commemorating the legacy of Elizabeth Hand Barr, whose donations made the new Oneida Library at 220 Broad Street a reality and who asked that the building be named after her father, Theodore F. Hand, Jr., and her cousin, Nellie Barker.

Commemorating the Ladies Circulating Library Association, which was formed at the home of Mrs. S. S. Goodwin on Chestnut Street (now Farrier Avenue) in 1878, the first public library established in Oneida.

In honor of Robert H. Fearon, who as President of the Oneida Library Board of Trustees spearheaded the New Library Building Fund in 1952 and oversaw the construction of the library at 220 Broad Street, for his energy and zeal in improving the civic life of our community.

In honor of Betty Angelino, who served as the Oneida Library Director from 1978 to 1992, for her dedication to the Library and the community it serves.

Commemorating the new address of the Oneida Public Library between Elizabeth and Main streets.

We use cookies to ensure that we give you the best experience on our website. If you continue to use this site we will assume that you are happy with it.Ok