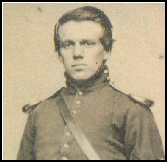 Henry J. Howe of Oneida, at age 21, enlisted in the Oneida Cavalry on August 24, 1861 at Vesper. He was mustered in on September 4 as a private, but that same day was elected a sergeant. On February 8, 1862, he resigned as sergeant and returned to the ranks as a private. He was mustered out of service on September 14, 1864. (Source: Annual Report of the Adjutant General, 1868. Oneida Public Library, Local History Collection. Photo courtesy of Beverley La Forse.)