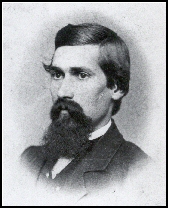 Dwight Chapin , aged 26 years, enlisted in the Oneida Cavalry on August 10, 1861 in his hometown of Oneida. He mustered in as a private that September 4 but that same day was appointed sergeant. He later became quartermaster-sergeant. He mustered out September 14,1864 at Oneida. (Source: Annual Report of the Adjutant General, Transmitted to the Legislature January 31, 1868. Oneida Public Library, Local History Collection. Photo courtesy of the U.S. Military History Institute.)