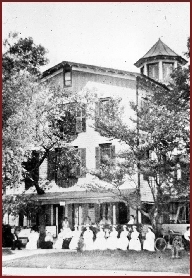 (Courtesy Madison County Historical Society)
The Cavana Sanitarium located at Park and Thirteenth Avenues, was built in 1891 for the care of patients with chronic diseases and those in need of the rest cure. It housed two 12-bed wards, 12 private rooms and a small school for nurses. In 1940, the McAndrew family transformed the sanatorium into the Oneida Lake House.

From Sylvan Beach , New York, on the Lake Oneida, a History by Jack Hencke, (North Country Books, 1980)
Doctor Martin Cavana came to Sylvan Beach from the CitY of Oneida, New York,in 1891. In Oneida, Dr. Cavana.owned and operated a private hospital famous for its “gold cure,” a.remedy for virtually any kind of addiction The doctor spent thirty-three years at Sylvan Beach, residing there until his death in 1924. No man in the history of this resort community has exerted so great an impact on its being. Martin Cavana established a Sanitarium and school for nurses on Park Avenue. Martin Cavana’s promotional “chamber of commerce” activities brought fresh economyto Sylvan Beach. Martin Cavana gained control of the Midway, then known as Carnival Park, and expanded it. He held virtually every important public office, being president of the Sylvan Beach Corporation, the Village’s governing body, for many years. The name “Cavana” became synonymous with the success of Sylvan Beach, and with the disappointment. Largely through the efforts of Martin Cavana, Sylvan Beach was incorporated as a village “by special acts of the Legislature chapter 812, laws of 1896” The corporation was reaffirmed by the “laws of 1901, chapter 361”
Cavana was one of the original trustees. In 1901, he was unanimously elected president of the Sylvan Beach Corporation, an office that he would not relinquish until the village incorporation was declared illegitimate in 1911. Through the office of the President, Cavana wielded virtually political “bossman” authority. He had the say in the chartering of new businesses and in the levying of the “corporation tax,” a property tax placed on all private holdings. His influence extended into all aspects of Sylvan Beach economic and political life. He was was Dr. Cavana and everything came out from him. 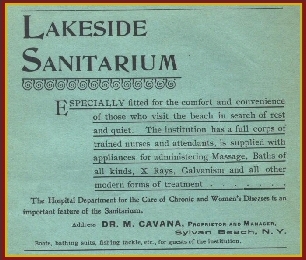 Cavana’s Sylvan Beach hospital proved to be a useful tool in promoting the Beach beyond the realms of upstate. Patients from New York, from Philadelphia and Boston came for the cures and the ease of Sanitarium life, These patients often chartered private trains to Sylvan Beach. The Chesebrough family, makers of “Vaseline” products, became acquainted with Cavana through the sanitarium. Cavana persuaded Louis B. Chesebrough, family head, to invest in the Beach. In 1899, Chesebrough financed the erection of the Hotel Saint Charles.

The Hotel St. Charles, built by millionaire Louis Chesebrough in 1899, was the elegant social center of Sylvan Beach in it’s golden age. Its balls, its Sarah and its “hops weekly” were regionally famous. The annual Hops Growers’ Picnic was the Beach’s largest summer extravaganza.

It was an exceptional place for Sylvan Beach, different from any business the Beach had ever realized. Old timers never fail to say “high class” when they reminisce about the St. Charles. With a capacity of over one hundred and fifty guests, the St Charles emerged as Sylvan Beach’s largest resort faclity. Until September 17, 1914. On that date a fire, of unknown origin, ignited in the the grand Beach hotel‘ All was destroyed, as the structure’s tinder quality showed through.

[For the less well-to-do, Sylvan Beach offered resorts with simpler, rural charms.] Sylvan Beach’s first large resort facility was the Algonquin Hotel, built in 1884 by C.G.W. Stoddard and Anthony T. Garvin of Oneida, New York. In the words of the proprietors, the Algonquin was:
…An elegant, new summer hotel, just finished and furnished with every regard for comfort, A first class restaurant [is] connected with the house, open at all hours, with a splendid bill of fare. . .

The Algonquin Hotel, finished in 1884 just before this photograph was taken, could boast a refrigerator that held 500 tons of ice, a 300 foot long dock, hicory groves and an unspoiled beach. In its time, it had more rooms than all the other Beach hotels combined.

Up stream you see the encottaged banks, the mingled yellow and green of willow fringe and hickory thicket along the shore, the quaint ferry above, the widesweeping, silent stream, so like that flood of Tennyson’s, down which floated fair Elaine to the imploring Lancelot. 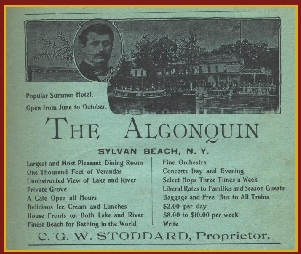 1875 Atlas of Madison County
from the OPL History Collection is now on line on the New York Heritage web site. Click here for high-resolution images of the maps of all towns, villages and hamlets in Madison County, N.Y., with the names of individual property owners in 1875.
Skip to content
We use cookies to ensure that we give you the best experience on our website. If you continue to use this site we will assume that you are happy with it.Ok