As part of its 2020 Centennial Celebration of the 19th Amendment to the U.S. Constitution, which granted women the vote, Oneida Public Library has invited historian Dr. Norman K. Dann to talk about the subject of his latest biography of a Gerrit Smith family member, Ann Carroll Fitzhugh Smith, on Wednesday, January 29, at 7:00 p.m. in the library’s Meeting Room.

Ann Smith, born in 1805, was the dutiful wife of abolitionist and reformer Gerrit Smith of Peterboro, becoming his most loyal supporter in his reform campaigns, even becoming deeply involved in the Underground Railroad. A firm believer in women’s equality with men, she became an early leader in the women’s dress reform and suffrage movements.

Dann, emeritus professor at Morrisville State College, is a founder and member of the Cabinet of Freedom for the National Abolition Hall of Fame and Museum in Peterboro, a steward of the Gerrit Smith Estate National Historic Landmark and an active member of Peterboro Area Historical Society and the Smithfield Community Association.

Copies of Dann’s “God, Gerrit and Guidance” will be available for sale and signing by the author.

Dann’s upcoming lecture is the first in a series of special programs in the OPL’s 2020 Centennial Celebration of the Women’s Suffrage Amendment. It is free and open to all. For more information, stop by the Oneida Library, 220 Broad St., or call 315-363-3050.

The new OPL rises from the earth

459 Main Street, January 14, 2020. During a spell of good weather in January, work on the new library facility went at a fast pace. Here, the interior wall metal framework, complete with window frames reveals the dimensions of the Children’s Activity Room, where storytelling, crafts and special projects will be done. (Photo by T. Murray) 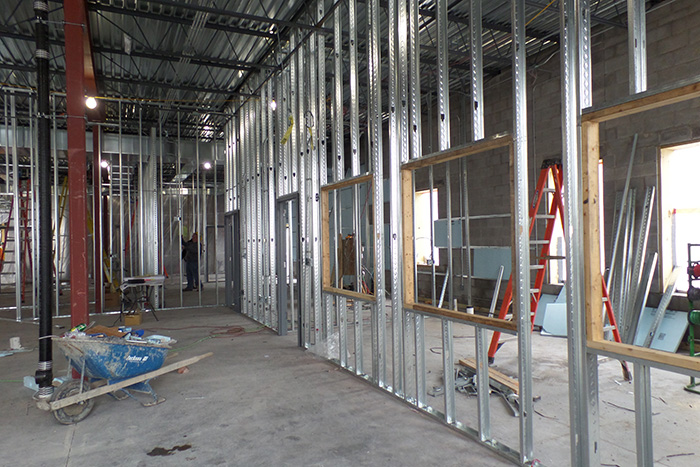 459 Main Street, January 14, 2020. With a view towards the main entrance of the new facility, the Local History Room can be seen in outline with the metal wall framing in place. (Photo by T. Murray)

The Oneida Public Library Board of Trustees has appointed March 3, 2020,  for the Library Budget Vote and Election. All registered voters who reside within the OPL Special Library District, which is co-terminus with the Oneida City School District, are eligible to vote March 3 when the polls are open, 12:00 noon to 9:00 p.m., in the library’s Meeting Room. However, if eligible voters intend to be out of town March 3, are chronically ill or are housebound for any reason, they may request an absentee ballot by filling out the Absentee Ballot Application available here and forwarding it to the OPL Director at 220 Broad St., Oneida, NY 13421.

The OPL Board will hold its regular monthly meeting on Tuesday, February 25, 2020 at 5:00 p.m. in the library’s Meeting Room, prior to the 7:00 p.m. public Budget Hearing and introduction of candidates for the open seat on the Board of Trustees that is up for a vote on March 3, 2020. The Meeting Room, 220 Broad St., Oneida, permits barrier-free access to the physically handicapped. The public is invited to attend the regular board meeting as well as the Budget Hearing.

More 19th-century newspapers added to OPL’s Digital Archives Thanks to a grant from the Central New York Library Resources Council and a donation from the Friends of the Oneida Public Library, the OPL’s Digital Archives of the Oneida Public Library now has the digital versions of 10 microfilm reels of Oneida 19th-century newspapers: The Democratic Union (Feb. 1872-Sept. 1875 and Jan. 1885-Dec. 1901) and the Oneida Free Press (April 1880-March 1886).

The OPL has Oneida High School yearbooks online Oneida High School yearbooks from 1936 through 2018 have been successfully digitized, electronically indexed and, as of today, posted online at the web site of New York Heritage, thanks to a Regional Bibliographic Databases Program grant to the Oneida Public Library from the New York State Library, as administered by the Central New York Library Resources Council in Syracuse. Those interested in exploring the yearbooks online can go directly to the New York Heritage site at: https://nyheritage.org/collections/oneida-yearbook-collection

Be a Library Champion

Madison County Reads Ahead is a free one-on-one tutoring service for adult basic education, English for speakers of different languages and GED preparation.

1875 Atlas of Madison County
from the OPL History Collection is now on line on the New York Heritage web site. Click here for high-resolution images of the maps of all towns, villages and hamlets in Madison County, N.Y., with the names of individual property owners in 1875.